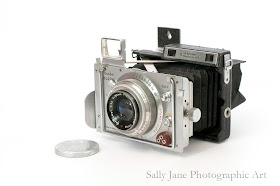 If you read my profile you will know I am following in my father's footsteps as regards to taking up photography.  He, however, was a commercial and industrial photographer whereas I specialise in pet portraiture.  Still, same principals apply.
My mother was recently clearing out her loft that had not been touched in decades.  She came across one of my fathers old cameras which she gave to me.  So I thought I would share it with you.
This camera is a Plaubel Makina IIIr. It dates back to the early 1950's. Dad would have probably bought it second hand. It is fitted with a 100mm f4.2 lens. I don't know if he had other lenses for it but he probably did.
It was designed to take individual negatives that were inserted into plates that fitted on the back. However, you could get an attachment to take roll film. The image below shows two rolliback for roll film and 4 film plates for individual negatives. 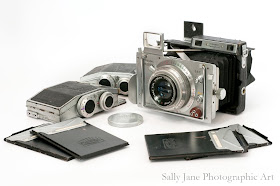 To focus the camera when it was on a tripod you fitted a piece of ground glass with a sun shade around it. You can just see the sun shade sticking out the back of the camera on these shots. The image would appear upside down on the ground glass plate. Once the image was composed and focused you removed the ground glass plate and replaced it with either the single negative plate holder or the rolliback containing the film. You could then expose it using the shutter release as normal. Not exactly something you could use for sports action.
If you wanted to use it hand held, instead of using the ground glass plate you could look through the pop up view finder  or use the range finder(the two rectangular ports on the top next to the view finder).
Really makes me appreciate my digital SLR.

Wednesday 23rd June
I've been encourage to take the plunge and run some film through this camera so I have ordered a couple of rolls of black & white 120 film.  It remains to be seen how competently I can use this camera so the results will be very interesting.