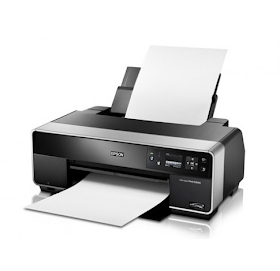 My printer died, long live the printer!  Up until recently I had been using an Epson Stylus Photo R2400 A3 printer for all my printing needs.  It was brilliant.  Unfortunately, printers, like all things on Earth, are not immortal and the inevitable happened.  It gave me an error message to say that 'components in your printer have reached the end of their service life'.  Yes there are fixes for this but all are temporary unless you are willing to fork out £200 to have it serviced by Epson.  I decided I wasn't so bought a replacement; the R3000.
The blurb was impressive.  Droplet size nearly half the size on the R2400 means finer gradients and less gain when it's not wanted.  New Vibrant magenta inks providing better colour and having both the black inks (matt black and photo black) installed all the time meant no messy change overs.  In practice a lot of this appears to be mostly spin.
Good Points
Bad Points
Fixes

There is a fix for both these issues however but they're not exactly well publicised particularly the ink issue.  If you bring up the printer menu on the printer's LCD panel you can scroll to 'Setup' then select 'Printer Setup' and then 'Black Ink Change Settings'.  Here you can select 'Economy' instead of 'Standard' which is the default.  You will get a warning about possibly losing image quality but believe me, you won't notice it and it will save a lot of ink.  It still performs a short head clean but it's much quicker than it is on 'Standard'.


As for the default settings you can get the printer to stick to Matt Black but you can't save it as a default as such.  To do this in Windows you need to go to your 'Start Menu' and 'Control Panel'.  Select 'Printers'.  find the Epson R3000 and highlight it. Right click on this printer and select 'Printing Preferences'.  You will see the same dialogue box you get when you send something to it for printing but the difference is that here it will remember the settings even after the printer has been switched off.  In fact, the printer doesn't even need to be on to do this.  Set it to Matt Black or what ever default settings you want.  You can even set the paper type you most use but that is not so crucial.   Now when ever you turn the printer on it will remember these settings.  Just remember though, if you change the ink during printing from whatever you have set as the default and turn the printer off when it comes back on it will change back to the default you have set so if, for argument sake, you, like me, have set your default to Matt Black, but you have a stake of glossy prints to print and so you switch it over to Photo Black, should you not finish printing the images but decide to come back to it later, if your printer is switched off in between you will need to go back into your printer preferences dialogue box BEFORE you switch your printer back on to prevent it returning to Matt Black ink.  Why, oh why, could it not simply retain the setting it had when it was last used????

I have to say I was expecting something amazing from this printer on reading the blurb and reviews.  Certainly a big step up in terms of quality from my R2400 so I was a little disappointed when I saw the results.  I printed an image that was identical to the last image I printed on my R2400 using the same paper.  I could see no discernible difference between the two.  OK, maybe if I had taken a strong magnifying glass to it I might have been able to see that the R3000's print was smoother but who looks at photo's that close.  Both images showed excellent detail and colour in my opinion.  The R2400 is no longer in production as it was superseded by the R2880 which is still being sold in tandem with the R3000 but cheaper.  The only real practical differences between the two is that the R3000 carries both black inks where as with the R2880 you have to manually unplug one and plug in the other and the larger ink cartridges in the R3000 but it not certain this will save any money.  So, what it comes down to is how much are you prepared to pay out for these two features?